Last December 7, we started our wedding coordination countdown since we were down to our last three weddings before we officially went on hiatus as a team. I am still emceeing though, so this December, the story of my life can be summed up in one phrase, "daily events".

Christina booked me way back because her wedding was supposed to happen in March. However, since work concerns would prevent them from going home within the required time of the church; they decided to move to December 2012. It's a blessing, too, because the whole family can come home -- some are here in the Philippines, but there are also a lot of members in the US, along with Christina, her husband, and their cute daughter, the little bride. (Loved how she marched down the aisle on the day!!!)

It was a day of family love as everyone contributed to ensure a fun, fun day for Christina, Harrison, and Maleah. From bringing food, making sure transport would be ready, to providing jokes and punchlines at the right moment -- everyone really gave the day their best shot. To cap the night, they did a family extravaganza that started with the father - daughter dance followed by dance numbers and song numbers. There was a mother - son dance, too. The final segment had the whole family dancing on the lighted dance panels and a flash mob of relatives joining in to the tune of Psy's "Gangnam Style".

After her big day, Christina sent me this: 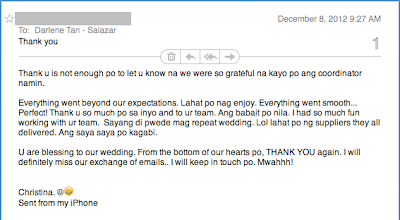 It was a day that had a lot of details -- including fireworks and lots of performers, but it was made easier by the family members who didn't treat us as mere suppliers. Thank you again! :)

Kudos to the other suppliers... job well done!

Superb photos and onsite AVP from James Limsoc. An SDE that truly captured the best scenes and mood of the day from Cinemaworks.  Great bridal make-up by Pong Niu with added details from Banggo Niu -- hair pieces, bracelets, and earrings. Super pretty flowers from Vatel Manila. Thematic set-up and great food from K by Cunanan Catering. Thank you for all the help, Macy and Kar. :)

Brenan did an amazing job singing the groom's march as well as the bridal march. The church choir that the family brought in made sure the mass songs would be sung with angelic voices. Music Box, thank you for the accompaniment and the great performance during dinner. Francis Day, thank you for keeping the crowd focused and entertained. Michael, thank you prepping the entourage so they could dance as they were called in... :)

Partypics, Flair up, and Alvarez Cars, thank you for being professional, as always. Printsonalities, thank you for the patience on the invite revisions. Impress prints, Eyzel, Chocolate Confections, and Theo and Philo, good job on the deliverables. Scenta Flora, loved how you did the floral upgrade. Thank you also to the one who did the make-up of the entourage and the moms -- a lot of heads, but you finished on time... :) Tito Boy, ikaw na... ang designer ng lahat ng ento... Thank you... :)

Veejay, thank you for sending manang over, and of course, thank you for making the bride and groom look even more charming... pretty and handsome na sila to begin with, but the attires made them more blooming and dashing!

Dragon fireworks, you truly wow-ed the crowd that night. (And you made James lie down on the cement pavement for some time -- ang haba ng show! Everyone felt even more festive... :)

*** I hope I didn't forget anyone. Truly, the success of the day depended on all suppliers pulling their part of the load. Thank you to my team... I know what I asked was not easy -- to be on your toes from 7AM to 10PM, but you did well. Thank you, Ari, John, Warren, Kristine, Ace, and Queen. :)
Posted by Perfect 10 Weddings at 6:58 AM No comments:

It's a busy... busy... busy time... but messages like these make the work all the more worthwhile... :) Thank you to my dear brides for taking time to send messages... :) 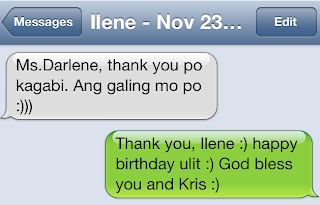 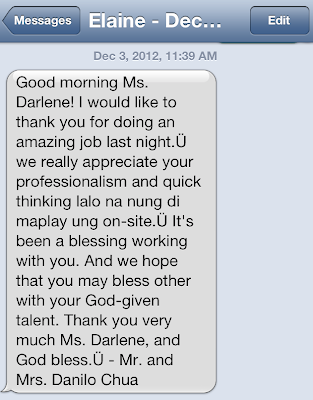