Elvin and Jam got really good suppliers to make sure their reception in Glass Garden would be a blast... among them: K by Cunanan Catering, Rejectkrew, Daniel Lei Studios, Anima Choir, and Metrotech. Vatel Manila's bouquet was, of course, part of the grand entrance and the group pictorials. The gown created by Clayton was really, really nice especially because it complemented the body structure of the bride super perfectly. Loved the way Kar and Macy worked to make the wedding styling match the couple's invitation -- down to the turtles on the menu board. Lei's SDE captured the happiness of the couple, such that up to now, I haven't gotten over the cheerfulness of Jam throughout the whole wedding. Rejectkrew and Metrotech made sure nothing out of place came out. Of course, the lighting was also superb.

Since they had their friends (led by Karen) doing coordination work, I gave a detailed programme with notes on what's needed per part. We also had a meeting prior to the big day so that all expectations could be discussed. We went through everything -- even what we assistance was needed for the games. I emailed a lyrics sheet with instructions and handed over a copy to Elvin and Anima so we would all be on the same page for the grand entrance. Loved how they completed both the singing entrance and the dance they planned... :)

I must commend the family and friends of Jam and Elvin for really shouting out the numbers as we did the personalized countdown -- they truly communicated their love for the couple. Kudos to the dads who gamely answered the remaining trivia questions as I asked the winners to pose with the couple for pictures. Of course, I will never forget the bride's father's speech as he ended with reminding Elvin of the 5 words Elvin should never forget:

Thank you again, Jam and Elvin, for giving me your full trust and confidence... :) Thank you, too, for the gift... :) 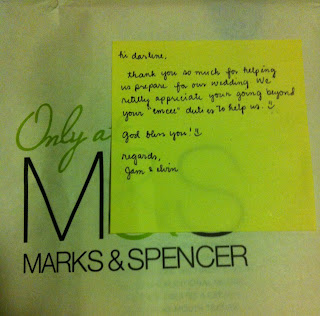 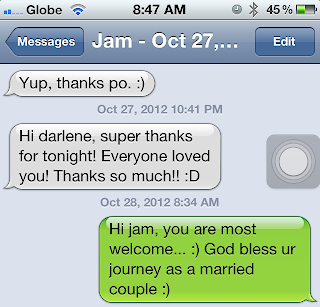 Thank you, Darwin and Stacey! :)

Thanks so much for this touching message, Stacey and Darwin... :) Yours was really a wedding that had an outpouring of love from family and friends -- the speakers communicated the sentiments of the crowd... :)

P.S.
Loved how the parents gamely answered the trivia questions... :)

Kudos to all the suppliers who worked behind the scenes... (in no particular order)
a) the pretty and sweet wedding dress -- Gretchen Pichay (complemented by the make-up of MJ Aquino)
b) the touching onsite AVPs -- Lai for ImagineNation and Kris Matanguihan
c) the great musical scoring and lights -- Rejectkrew
d) the attentive staff who played the AVPs at the right time -- Metrotech
e) the photobooth that kept everyone entertained -- Baicapture
f) the beautiful music with the powerful voice of Jenny -- Bernie Pasamba
g) the efficient work of Marianne Chua and her team (including her hubby who was really hands on)
h) the hardworking staff of Crowne Plaza and their head waiter, whose name escapes me at the moment (but he did really well as Captain Waiter) 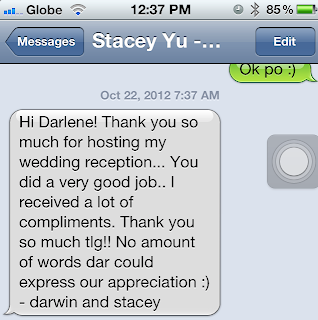 This is not actually an article about overcoming shyness... it's more of a tribute to two couples who did so well during their respective first dances last week.

I was in awe of how Roger and Lea pulled off their first dance. They asked me to make a spliced mp3, but they didn't give me feedback after. They just told me that they will practice. So it was really so surprising for me and their wedding coordinator, Ms. Ria Madamba of One Wish, that they started in front of the couple's area, and they danced all the way to the end of the aisle. I think this decision to get creative with the aisle made the guests appreciate the dance all the more -- after all, they had their reception in Glass Garden and usually, the guests at the back feel that they are too far from the couple. At least, with the first dance, they were able to make the guests at the back see them and their moves up close. Their steps were not very fancy, but the excitement and the desire to make everyone see them as they dance caused everyone to get energized. This was no mean feat, because theirs was a lunch reception!

With Luzelle and Jaycob, I knew there was a choreographer who would do the mixing of songs and the steps, but they didn't really discuss how the dance would be. Jaycob was very quiet during our first meeting, so I was a bit scared that he would be shy on the dance floor. On our final meeting, Jaycob was airing his views more openly and I figured that it's a good sign. As they started dancing, I could see Luzelle whispering instructions, but I saw in Jaycob a man who decided to overcome his shyness so he could make his bride happy and yes, that was enough to make the dance so electrifying! By the time they got to their gangnam style steps, the whole Whitespace was thundering with cheers and applause. Talk about making the wait, i.e. the cocktail period, worthwhile! :) (Yes, they also had a photobooth, canapes and other food items from K by Cunanan Catering, and Elations to keep the guests entertained, but I think the dance really communicates to guests how much a couple values them -- that they would spend time to practice and they would overcome their "shyness" and anxiety just to perform for them.)

My biggest regret? I was transfixed and forgot to take videos of the dances -- even if I had my iphone with me... But then again, that's still a testament to how great the dances were, even if I have been emceeing and coordinating for some time now, their dances still got me awe-struck!
Posted by Perfect 10 Weddings at 12:35 PM No comments:

Thank you, Jay and Karen! 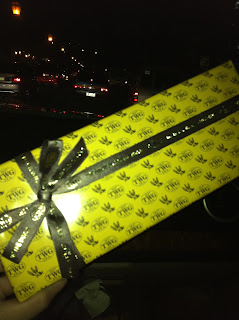 Thank you, Jay and Karen...

a) for choosing a great team of suppliers to handle your wedding (Events Malditas, Erron Ocampo, Phoeben Teocson, Chichi Sotomil, Rejectkrew, Maja of Passion Cooks)... :)
b) for being so thoughtful and even giving a gift... :)

c) for being so gracious throughout the preparation process... :)


Some may wonder why I noted A... well, because an emcee who goes into a reception needs the support of every supplier. For instance, if an emcee announces the names of the bride and groom for the grand entrance, he/she needs the coordinator to ensure that the bride and groom would really enter at that point, the sound system would play the right song, and the lights technicians would make the atmosphere even more festive. During the games, he/she needs the coordinators to help with the formation of the people, with giving props, and of course, with distributing prizes. He/She also needs the onsite photo and the same day edit to be ready when needed; thus, having photo and video teams that work according to the set time frame makes the program run smoothly and without hitches. :)

On the 6th of October, everyone did their tasks like clockwork... Karen and Jay had a few pictures, then they were off to the able hands of Chichi for retouch and the waiters of Passion Cooks for their light dinner, the entourage did their best to accomplish the requirement of the countdown AVP, i.e. to reach the dance area in 15 seconds, pretty Gen Teocson declared the SDE ready towards the end of dinner; Erron also finished his onsite photo a few minutes after. Elmer did his usual magic with music and lights. The basketball hoops of the Events Malditas were truly challenging...  but Jay really helped the bachelors visualize how they would have to shoot those balls. Hehe! :)

Jay and Karen were great because they really finished the templates before coming home and facing the hustle and bustle of the week before the big day. They also gave me the needed pictures and songs on time. Wow! They also did their best to perform a great first dance and gamely did what was needed for the program -- even to the point of buying lots of prizes... :) Oh, and I must mention their cutie invitation which really gave the guests a way to know what attire is expected of each one. Congrats and Best Wishes once again! :)