Do you know what causes couples the most stress a week before the wedding?

Couples use up a lot of energy and resources just to mount their weddings. Planning for several months, revising the programme just so guests will enjoy, going through several food tasting sessions and a hunt for useful souvenirs just so guests will feel going to the wedding would be worth their time -- the list is endless.

However, do you know what has caused many a bride and groom to be stressed a few days before their march down the aisle? (Assuming all their suppliers are ok and everything is on schedule...)

Answer: the responses/lack of response of some guests

How do some guests cause stress? Let me count the ways:

To these guests, I say: imagine spending anywhere between XXX,XXX to XX,XXX,XXX for your celebration, and imagine how you would feel if your chosen guest said, "I'm not sure, "bahala na", or "hahabol kami".

The problem here is not just the money spent but also the REALIZATION that the bride and groom considered the guest special, but the guest doesn't consider them special enough to give a real, polite response. It would be better to tell the bride and groom that you can't go and you really regret it, rather than tell them "I'm not sure".

If you tell them you can't go, at least you are not causing problems while they are fixing their final guest list with table numbers. If you say you're not sure, "pinapaasa mo sila"; thus, they will take great pains to include you in the guest list -- even resorting to paying for your seat and your meal, only to find out you weren't really planning on going anyway.

For me the guest who sends an SMS on the day informing the bride and groom of his/her absence is a gray area. On one hand, it's good for the coordinators because they now know of an extra seat -- especially if there are hardly any extra seats for those who aren't in the guest list. On the other hand, it can be a downer to the bride and groom when they receive such messages before walking down the aisle. Perhaps, it would be better to send such notes to the coordinator instead of the couple.

Those who bring kids have to remember that, kids of a certain age, I believe 7 and above, are counted as adults. Younger kids are counted at half count or need kiddie meals so as not to be considered as additional heads. That means when you request for added seats for your kids and your yayas, you must note that you're asking the bride and groom to spend more.

So to all reception guests, here are a few reminders: 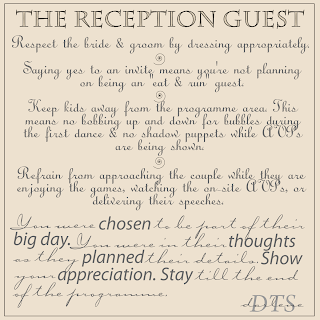 P.S. The points raised here are all based on past experiences as coordinator. This article was written to be of assistance to couples who get stressed while encoding the final guest list. As one friend of mine put it, "You can't say the guest list is not a problem until you're on your final week prior to your own wedding". (This was her response to a groom who said the guest list is not a problem. Well, when he said it, he was still months away from his big day. So yeah, he couldn't have known better... ;-)
Posted by Perfect 10 Weddings at 11:03 AM