Of Mixed Marriages and Meaningful Programmes

The first wedding I coordinated and emceed was that of Billy and Abby in June 2010. Yup, almost 3 years ago! 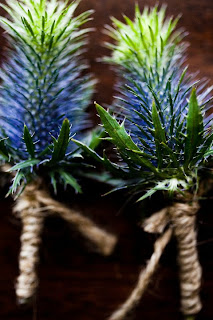 We made sure the details and programme would meld Scottish and Filipino traditions so that both their sides would get to know a little about the nationality they are marrying into. (Note: All photos are from Really Awesome Weddings, through the kindness of Abby who allowed me to grab pictures from her FB page.) 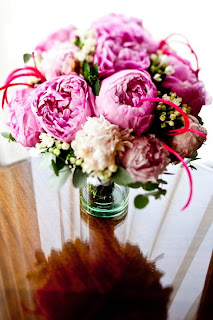 Of course, because I mentioned Vatel Manila, I must also post a picture of the beautiful bouquet of peonies that Abby held as she walked down the aisle.

The term "peony" came from the name of the Greek physician, Paeon, who supposedly received the said flower from Apollo's mother, Leto. Thus, the peony is believed to have healing properties.

Incidentally, Abby is a physician as well, and she, of all things, had an epi pen in her bridal purse -- in case someone gets an allergic reaction to something on the day. Talk about being such a thoughtful bride! She even planned for guests who might have food allergies as she was preparing for her big day :) 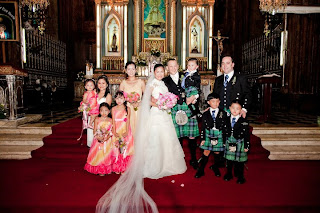 The groom, his father, his best man, and the bearers all wore kilts -- shipped all the way from their home country! To say that these ensembles are heavy is an understatement. As we attached boutonnieres, we realized how much they would suffer due to the thickness of the cloth and the heat in our country. The kids definitely looked too cute for words! Raphael, their son, refused at first to wear the kilt saying, "for girls", but he eventually agreed when he saw the rest wearing their official attires for the day. 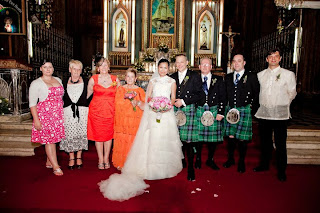 If you're wondering about what the rest of the entourage wore, well, they donned traditional Filipino garb -- the Barong Tagalog.

One of the groom's friends who was also a secondary sponsor opted to wear the Barong Tagalog as well, so that he would not look different when marching down the aisle between the first and third pairs of secondary sponsors. (Oh yes! He also teased the men that he was more comfortable because he wasn't wearing an ensemble worth several kilos.) 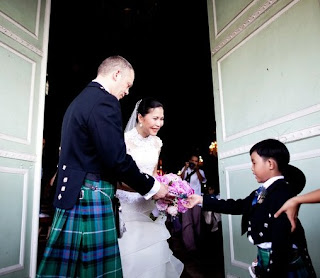 At the end of the recessional, one of the bearers was tasked to hand over two decorated horseshoes to the bride. This Scottish tradition symbolises good luck, as the groom's parents dutifully explained to me when she handed over the pink box.

We also had the usual shower of petals for them as they exited the church. San Sebastian does not allow the more traditional shower of rice grains.

Of course, we had to let the foreign guests experience how festively we greet the bride and groom after they are declared man and wife. 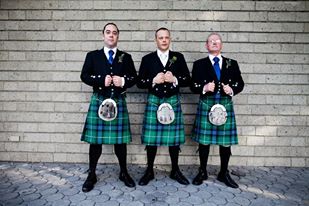 The men though were such troopers -- posing and smiling for pictures -- till it was almost time for the reception. I think even the church officers of San Sebastian got pleasantly surprised by the kilts that they were also all smiles as they asked each member of the entourage to line up and march.

Oh! Raphael wore his kilt till the end of the program! He absolutely refused to remove it even if his yaya was offering him a change of clothes. So cute! :) 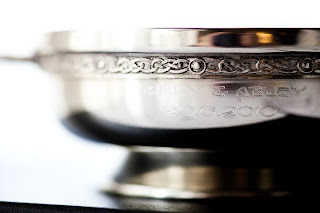 During the reception, specifically the cake-cutting part, we had a regular knife but we told the guests that there is a specific cake cutting sword, called a dirk, that the Scots traditionally used for this part of the ceremony. What we did have was the quaiche, their traditional cup shown in the picture. It has two handles because historically it was used a way to welcome guests and signify trust and friendship. During the ancient times, guests were welcomed with a drink from the said cup. As they held it with both hands, they definitely could not hold a weapon as well, that's why it's a symbol of welcome and trust. On Billy and Abby's big day though, they used the cup for their toast as a symbol of their union, i.e. drinking from the same cup.

Since that time, I have had several other weddings between Filipinos and other nationalities. In one Welsh - Filipino wedding, we had a bagpiper providing music to guests during cocktail hour. In another, we had a little girl give the Irish bride and Filipino groom a horseshoe for good luck. In yet another, the American groom requested that we end the programme with a chicken dance... :)

Let us fast forward though to the wedding we just had some days back, the 5th of June 2013, a Mexican - Filipino beach wedding. :) They had cacti all over the place -- most notable though were the big replicas they used as photobooth background and as message card holder. Forgive the picture quality, I just took pictures using my ipad. :) 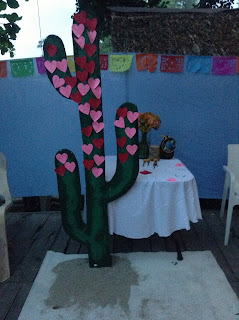 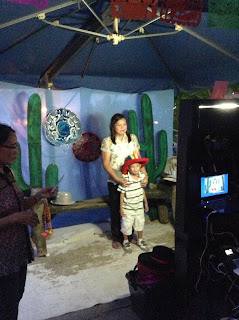 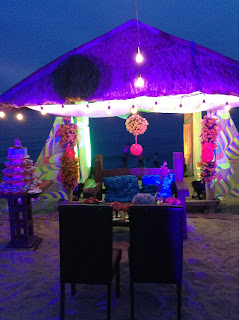 I thought it was because they wanted to symbolize their surroundings in Mexico, but when I saw a cactus with hearts in their prenup AVP, I asked if there was a particular meaning to having cacti as part of their wedding decor. Alan, the groom, remarked that a cactus reminds Mexicans of how "love can be painful at times but in the end, it's all worth it". So sweet right?

They used a Spanish song for their entrance, and a medley for their first dance with you guessed it right, another Spanish song. It was the groom who personally choreographed the dance because as Anna said, the groom is the better dancer between the two of them.

The couple's area -- complete with a nipa hut and a bottle of tequila -- shows us how the stylist thought of melding the two cultures together. 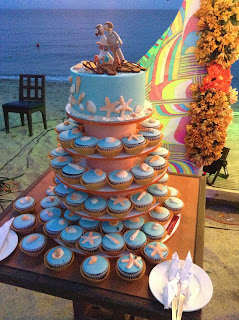 The cake comes to us straight from the beach with all the faux shells attached to it. The bride and groom were really cute though -- they did their cake cutting, dutifully served forkfuls to each other, then they turned and had a picture biting into cupcakes as well. Sweetness twice over!

They used wine for the formal toast but for the toast led by the maid of honor, they had tequila. Actually, Alan and Anna made sure there would be enoough tequila to go around by putting them on tables along with shot glass souvenirs for all attendees. No excuse not to have a shot, right?

Dinner entertainment was provided by their friend, RJ, who went OPM all the way.

Upon resuming, we gave the usual trivia game a twist by having everyone answer questions based on Mexican and Filipino wedding traditions. Yes, this is instead of the usual Q and A about the bride and the groom. The teacher in me came out as I researched for possible questions.

The clincher? When do Mexicans use the piñata?
a) during birthdays only
b) during weddings and birthdays

Do you know the answer?
After the trivia game, we had another one that required participants to stand in front. Everyone paid attention to this game because:

a) we had singles and married couples as participants -- so they didn't know what to expect
b) w@w couple, Joed See and Allan See, gamely agreed to do the sample poses for the rest of the ladies and gentlemen -- impromptu!!!
c) the men were asked to wear aprons -- in the Mexican vernacular, they call it "mandil", and it's part of the game because it symbolizes how men in Mexico are made to help out with household chores and the like (Someone in the audience quipped, "Ay parang Pilipino'ng lalaki din lang".)

d) the ladies were asked to wear homemade veils -- in this case, the bride got a lot of assistance from her bridesmaids and maid of honor

e) after they wore their aprons and veils, we revealed the real task ahead -- to catch a rose (girls) and a garter (boys) in order to avoid the consequence!

g) the married man and the single girl who ended up with no garter and no rose were asked to just dance the waltz with the bride and groom -- no garter taking (w@wie Donna gracefully agreed to allow her husband, Sai, to dance with single girl, Carla)

The two on-site AVPs from ImagineNation and Aisle 1401 were true to the Mexican - Filipino theme... Wish I could already post both links. As of now, only the Aisle 1401 link has been posted by Anna... :)

How does one end a night full of joy and laughter? The best way we Filipinos like to observe great events -- with a major fireworks display!!! 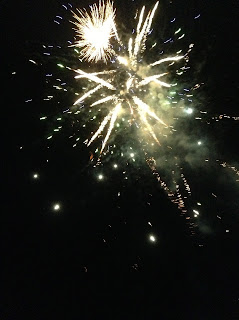 Thank you so much, Anna and Alan, for the gift and the touching note that you wrote!!! Super duper appreciated! :) 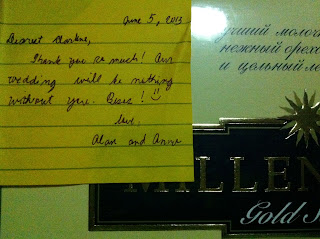 P.S. Because Alex Ruelo of ImagineNation already posted these two images, I am sharing them here: the first is Alex's perfect "dove release" shot, and the second, his picture of the bride and groom with their w@w and GT family. :) 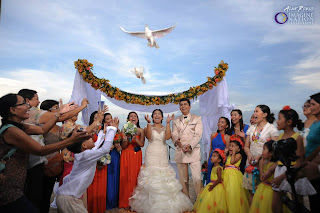 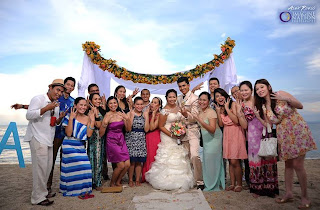