From Tagaytay & Back: A Tale of Three Weddings

It started with Rachelle's visit... She reserved for her wedding in Ville Sommet on October 23, 2011. We were fairly new in the wedding industry then, and she had a lot of details. But she trusted that we would be able to pull it off -- that was all we needed to give her big day everything we had -- resources, energy, and much love.

Rachelle and Paulo thought of having an adventure theme, so yes, we talked extensively about the invitation, the set-up, and the programme, including the games which had an adventure feel to them as we challenged the participants with the creatively quirky ideas Rachelle and Paulo had. I also made an AVP for them to highlight how much of an adventure they've had in their journey towards marriage. This AVP was shown right before they made their grand entrance. 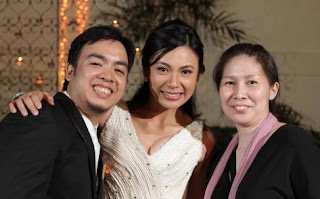 Here we are, haggard at the end of the programme, but definitely high with the one of the best feelings of accomplishment... :) We had so much fun talking about the highlights of the day and "laughing over desserts" that we did not leave till fog had taken over much of the road from Ville Sommet to the Tagaytay rotunda. (Are you wondering why there's a phrase above that's enclosed in quotation marks? Let's ask Nella! Hehe!)

This wedding would not have been as perfect as it had been without the able hands of K by Cunanan Catering, Jayson and Joanne Arquiza, Bong Sare of Threelogy, Vatel Manila, Veejay Floresca, Boy Kastner Santos, Missy Ferrer-Litao, Chichi Sotomil, Sound Salad, and their very own coffee bar. I hope I didn't forget anyone... I am working from memory here... :)

Soon after Rachelle's wedding... her friends started contacting me for coordination. Thus, in 2012, we handled two more weddings from their circle of friends -- Lois and Leigh.

Lois and Gil tied the knot on August 18, 2012. They chose to have their mass in Laguna and their reception in GCF Alabang. It wasn't so difficult since traffic didn't take over SLEX that day. Thank God! :) 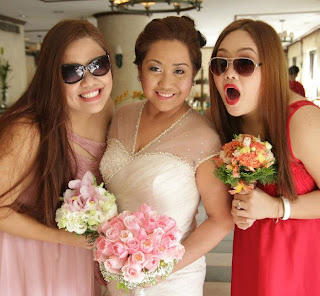 I had to bargain with all the church gods (i.e. manangs) to let them say their vows. I even received communion and mentioned the same request to the priest. They were required to email the vows, and they did. So why deny them that right? They relented, the priest gave them a chance to end the mass with their vows, and I don't think there were a lot of dry eyes after Gil and Lois said their respective lines. I wish I could state the vows here... but I can't... only a doctor-bride who is so in love can think of and deliver those lines with as much emotion. You truly are one lucky guy, Gil! 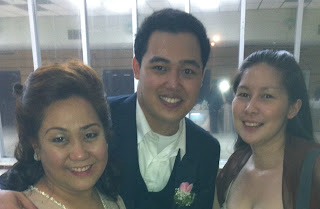 Emceeing duties were also entrusted to me, so we had a countdown AVP to usher in our couple. Later on, we showed the growing up and tribute AVP dedicated to their parents. It was a night that combined a lot of laughter and a lot of touching points. No "dessert moment" as far as I know, right, Nella? Just a "shoe box" moment during the Maid of Honor's speech... :) Ikaw na ang MOH na may props pa during the speech! :) 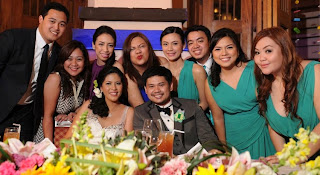 My third wedding with the barkada happened on December 1, 2012 in Splendido. Yup, all three -- out of town! This was a bit different since we had a garden ceremony. When I was feeling the heat as I was checking on ceremony area details, I just could not help but look up and thank God for giving us an extremely sunny day. It would not have looked as picturesque if there were tents all over the garden. The priest also set the record for having the most interactive ceremony as he gave the godparents, parents, and secondary sponsors speaking parts... so yes, we had to keep moving the mics all throughout the ceremony but it was well worth the effort. There was also much pressure on Leigh and Herbert's readers as they read the Bible verses in Filipino.

No one will ever forget the vows and how they induced tears from the bride and groom and the rest of their family and friends. Ano nga ulit ang title ng first movie, Herbert? :) This couple proved that partners need not have a really long engagement to know that one was born for the other. 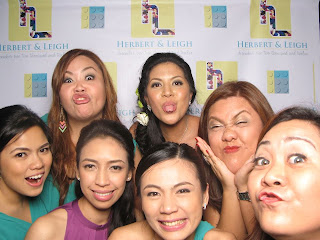 There was so much laughter during preps in Taal Vista. Perhaps, Nella really set the mood when she uttered the now famous line, "Good morning, Philapins!" (I hoped I spelled that correctly... hehe!) The kulitan in the room was further fuelled by the presence of the suppliers who had enough energy to match up toe-to-toe with the barkada. Noel Salazar and ImagineNation, CJ Lagman of Threelogy, Rae Venturanza... I feel as though the other rooms around us became more energetic just by hearing the thunderous burst of laughter that ensued from our room then. (Joe San Antonio, I know you were with us in spirit that day.)

Vatel Manila's lego-inspired boutonnieres and handmade bouquet were complimented by the fresh floral bouquets, ceremony set-up, and reception arrangements by Serge Igonia and his able team. Leigh and Herbert gave their Lego theme their all as they did their DIYs -- a lego curtain, lego escort card holders, lego place card holders, lego table numbers, and lego giveaways. Was there a point when the guests did not know the theme? I don't think so... hehe! Even the cake had a lego vibe. :) 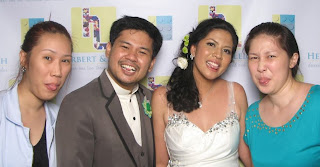 Ellen Timbol, Velvet Mood, Artuz, Christine Bautista, and the Ladera staff ably handled the other needs of the big day.

We ended in such high spirits that we even had the case of the missing shoe to cap the evening... can you imagine how Rache got the shoe without Marose (or was it Nella) noticing that it had been taken?

Rachelle, thank you for investing so much trust in us when we were still new in the industry... It's something we will never forget. Imagine! We were able to handle all three weddings and we witnessed three of your great life moments -- your wedding, your pregnancy, and your first crack at motherhood. It was great Raine came for a visit at preps! :)

Thank you, Lois and Leigh, for giving us as much trust as Rachelle did. Thank you to the rest of the barkada, Paola, Nella, Marose, and Diane... You all contributed to making each day memorable and full of love. You are all lucky to have each other, and most of all, the men are lucky to have you... :)