You're a member of the entourage, now what?

Some take being given a role in the entourage too lightly nowadays -- they don't even show up on time for the ceremony or they totally don't show up at all. Some arrive at the reception with a change of clothes and cause many a bride/groom to get annoyed that the group picture will have a stand out, other than those whose big day is being celebrated. Some spend the better part of the ceremony, pictorials, and reception smoking outside and/or using the photobooth. Some leave earlier than everyone -- yup, right after dinner. As entourage members you are automatically part of the couple's support group -- how are you expected to give them guidance or a shoulder to cry on if you're the first to bail on them on their big day?

If you can't commit to being part of the couple's support group, then just refuse the invitation to be a member of the entourage with much regret. They'd appreciate your honesty in the long run. At least, they didn't need to spend for a dress that won't be used, or a suit that won't be worn on their big day. They also didn't need to run after you for your fitting and measurement, because you decided to let them know early on that you can't commit. #honestyisstillthebestpolicy 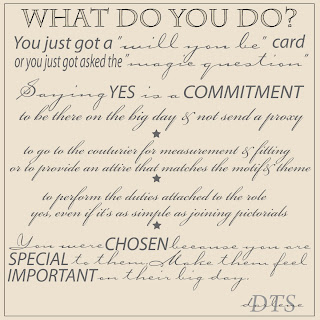