It was a bittersweet day...

My husband, Emman, called me around 7AM to tell me that Focus is a total wreck. It was surreal. I thought I was dreaming. If it were a total wreck, why was he calling me? He was driving the car, after all. Besides, we were just talking a few minutes before that, and everything was fine.

Well, his guardian angel must have been working overtime that day -- just as he has been the past two months he has been working 12, 14, 16-hour shifts with his current company. He came out unscathed, save for 1 scratch on his left wrist and a bruise on his right wrist. (His side airbag didn't deploy thanks to the free seat cover from Ford Alabang -- the worst in after sales service. They could have at least given a warning that if we'd use it, we'd also be putting ourselves in harm's way, right?)

We can't fully explain what happened, except that we saw debris from the concrete island on the road from a construction along Commonwealth which, of course, had no sign, no orange cones, and no barrier. Did I say there was also a deep hole with metal bars which could have skewered my husband had the car fallen in? (Oh, but we shouldn't have expected the city government of Quezon City or DPWH to have placed more than a very thin yellow ribbon in the area. We live in a corrupt, third world country. Obviously, here, living day in and day out is a miracle in itself. Look at the Yolanda survivors and what they are going through despite the billions in aid given by foreign countries and private citizens.)

The fact that we can't fully explain what happened and why he was not hurt just tells me Emman experienced a miracle in its truest sense. And for that, we are very thankful. (We received word two days later about another car that overturned in the same area, with one getting stitches and the other passenger experiencing a fracture.) 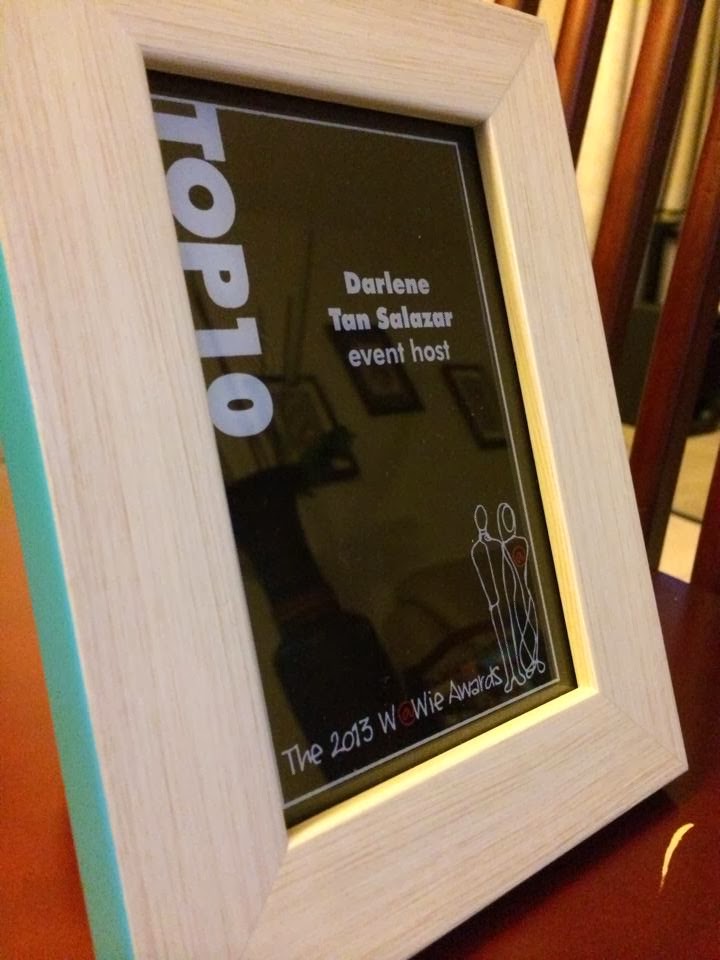 That night, we decided to still attend the Weddings at Work Party. Emman was in Malaysia -- on a speaking engagement -- the last time I was part of the Top 10. That was in 2010 and Perfect 10 Weddings was on its 6th month. P10W officially ended its run and started its hiatus last January 2013. This second trip to the Top 10 is for a different category -- wedding emceeing.

It was great to see familiar faces -- former brides, co-suppliers -- gathered in one venue. It was also a lot of fun to meet future brides whose faces I've gotten to know because they added me on Facebook. I asked my dad and my niece to go, first, because my dad takes care of the music I bring to every wedding and second, because my niece always complains that I have a wedding and can't spend time with her. Emman was with me as well. After all, he's the one who brings me to and from most of my weddings.

It could have been a very different story that day. I shudder to think of that thought. So let me end with much thanksgiving to the Almighty Father and to Emman's guardian angel.

Thank you to everyone who sent in their well wishes and their congratulatory notes via Facebook and SMS. Truly appreciated... :)
Posted by Perfect 10 Weddings at 7:10 AM