How did I become part of their list of suppliers?
When Thea Ocana called me about this couple, we were less than a month away from their wedding date. However, the couple wanted something unique and they were unfazed by the days we had left to prepare. Thank you, Thea, for assuring them we could pull it off. :)

My suggestion regarding the entourage entrance...
Iking and Irish openly told me of their grand entrance to first dance scheme the day we met and despite time constraints, they dutifully answered the workbook I gave. While reading through their responses and thinking of how they will pull off their plans, I asked them if their entourage would be open to the idea of "joining the fun" because Alphaland has such a long aisle and I wanted to make use of the extra spaces. Of course, I also wanted the entourage to get into the spirit of the theme.

Hurrah for her man of honor!!!
Irish said yes! She even mentioned her "man of honor" who really choreographs dances. Yey! She said we could ask for his help while briefing the entourage. When her man of honor finally arrived at the reception venue, his first statement was, "I've seen you in a previous wedding!" Then he rattled off some names until we finally got to the name of the couple who also had a unique entrance for their entourage. I was thrilled! I told him of the plans as the coordinating team of One Wish rounded up the rest of the entourage.

As the entourage members arrived, they looked disinterested. Perhaps, they were thinking we would ask them to enter two by two -- the usual. When I called out to them and told them we were going to do something unique because Iking and Irish believe in their ability to pull of their entrance sequence, they all joined the circle and listened intently. My former bride became a bit anxious when I told them they would dance. However, in the end, with the man of honor's assurance and prowess, the members of the entourage calmed down and started memorizing what they could do to pull of their entrance sequence.

What did we accomplish much to the surprise of the guests?

a) We didn't ask the entourage to line up. We trusted them to all go to their assigned areas upon the cue, "Where are the members of the entourage?" Just the fact that they all reached their areas within the time allotment made me so jubilant already. But seeing them dance just to please the bride and groom? Priceless! Photos, except for one which I included in letter c, are all from Jaja Samaniego and her hardworking creative team. :)
b) People didn't expect what transpired, so they all looked pleasantly surprised when the members of the entourage started dancing in different areas of the venue. For me, it was a way to reach everyone, despite large space.

c) The couple danced a medley and caused their guests to stand and whip out their camera phones and tablets. Everyone was all smiles -- sharing in the happy vibe that couple exuded. Check out this SDE created by Blacktie Project to hear their vows and see several parts of their dance medley. Just by watching their steps, you'd already guess the song they are dancing to.


Can't get enough of how happy the guests were for the couple? Check out these shots of the other members of the entourage :)
Thank you, Iking and Irish, for giving me the opportunity to work with you on your big day. It was such a joy for me that you were both so open to a variety of ideas and suggestions. May God bless you more and more... Cheers to a life of bliss! :) 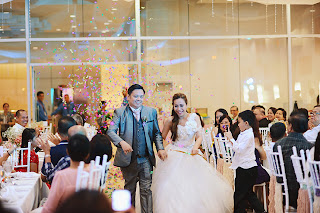 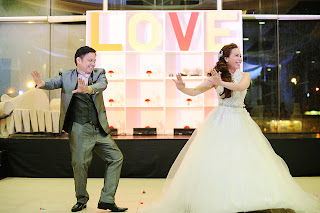