Should you inform your parents regarding your wedding plans?

In our culture, we have what is called the pamamanhikan. It is a gathering wherein both sides are informed of wedding plans. Sometimes this can’t happen right away because of various reasons — living abroad, covid, parents are thought to be unsupportive, etc.

Parents, being who they are, often want to know what is going on in their children’s lives — it doesn’t matter whether the son/daughter is 2 or 32. They would still like to be informed.

However, as a wedding planner, I do understand how often parents — despite trying to help — affect wedding plans and mold them according to certain norms they believe in. Example: you would like to have an intimate wedding with people you truly know while your parents want to invite a lot more — even those who are unknown to you. Or they want to have certain famous people as godparents even if you’d rather keep the list focused on those you can talk to anytime. Then the clash happens. 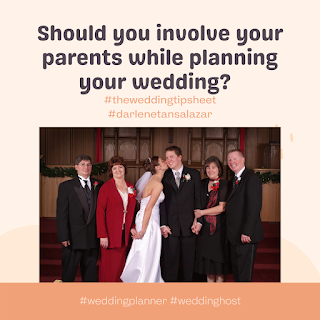 If you would rather not have your parents involved in the planning phase, talk to them nicely that you feel this is your first big project as a couple so you would rather focus on things you really like. However, if you will do this, make sure you do not need any form of support from your parents. If you will ask for money or service/assistance in the form of handling paper work, etc., then you better be ready to also listen to their suggestions.

To be fair, not all parental suggestions will clash with your plans so it’s a good idea to listen. That way, they won’t have resentments days leading up to and on the day of your wedding. It’s hard to deal with parents who are unhappy on the day. They can affect the photos and video clips that will be taken simply because their actions can affect your mood as well. Worse, they might say something negative during their speeches.

So best thing to do? Compromise. Say yes to suggestions you can live with and ask them to accept some of your plans as well. That way, no resentment builds, and no problem on the day. Do this compromise early on so you won’t feel trapped as well when they tell you they already invited several friends or they already asked some individuals to be godparents. Obviously it would be difficult to uninvite people. Avoid letting the situation get to that point.

Most parents have so much love for their children. Hence, a lot are willing to compromise. So try them first. Don't make hiding your wedding plans your first option especially if your whole lives your parents have been nothing but supportive of your dreams and aspirations.

{need a planner or an emcee, message me via darlenetansalazar@icloud.com}