A Full Weekend and a Full Heart 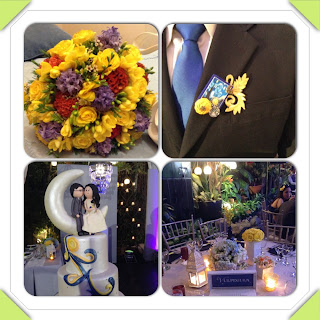 I had four weddings this weekend -- one on Friday, 2 last Saturday, and 1 yesterday/Sunday.

Friday had a starry, starry night theme in Glass Garden. They had a really nice painting to encapsulate the theme. It also served as their message board and I guess the guests loved the concept that they all didn't need to be asked twice when they saw a pen beside the painting. The canvas was full of messages by the time we ended the programme. The table names were also based on constellations which we got to emphasize because there was a table bingo as well. The painting served as their base for the boutonnieres, too! And check out the dazzling and cheery Vatel Manila bouquet! The vibe was effectively matched by the set-up of K by Cunanan Catering. 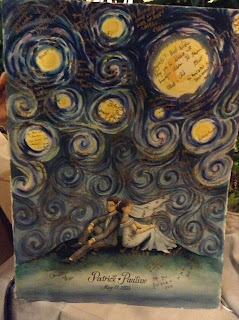 After dinner, we had a "Name That Tune" contest. Of course, among the songs were: "Stars" and "Vincent". Loved the guests' reactions to the songs as we played each one through the sound system brought by Ms. Chi of Once a Bride. They were even singing along to some tunes. Because there were selections from the 70's, even the godparents were answering -- telling each other the titles -- even if they were technically excluded from the game.


We ended the programme with a great SDE from Niceprint. :)

The heartfelt "thank you" from the couple was more than enough to make my night complete. :) 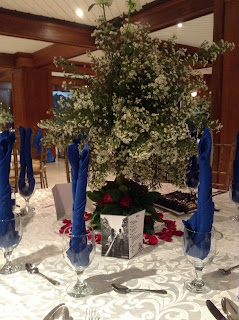 My first wedding last Saturday was in Camp Aguinaldo. They didn't really have a theme, but the couple truly wowed the crowd with their dance numbers -- first, with the entourage using the tune, "Gentleman", then on their own using three songs. Yup, they pulled off a medley despite having only a few days to prepare for the programme. :)

During the programme, the wedding superstitions game was a hit among guests with everyone competing to give the correct answers. The clincher was the question regarding the nationality that started the tradition of wearing white. During the said sudden death round, one participant raised "B" right away, so the other one had to go for "A". Little did he know that "A" is the correct answer! So yes, the group went home with prizes from the bride and groom. :) 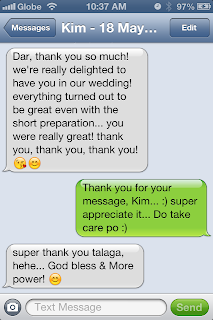 We also had a singles game wherein we ended up inviting the fiancee of the bachelor who got singled out. Everyone laughed as the girl thought she had already escaped getting a consequence that day. :)

In lieu of dancing to get the garter, we had the 3 kisses challenge which the groom and the bachelor did with gusto -- after all, they were kissing the ladies they truly loved. :)

The very touching handshake and thank you messages I got from the parents before I left were more than enough to make my day, but today, Monday, I received a really sweet message from the bride as well... Thank you, Kim... :) 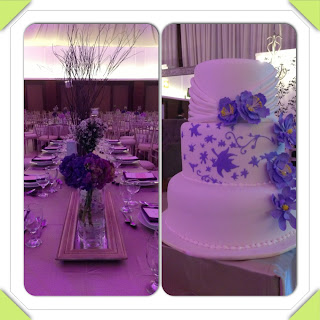 I wrote a separate blog entry about by second wedding last May 18 in Blue Leaf. The beautiful set-up on the right is from K by Cunanan, while the cake came from Hearts and Bells. Great music flowed from Sound Salad with Sensitivity providing tech support. :)

See:  Aian and Tata: Our OBB

In the link, you will get to view the OBB I made for them. This is the AVP that gets shown right before the couple's grand entrance. :)

Tata was also very sweet because even if she was supposed to eat, have her retouch, and worry about her grand entrance and first dance, she remembered to ask her coordinator for the gift she wanted to give me. The picture of the gift is also in the link... :) Super touching gesture! Thanks again, Aian and Tata... :) I'm sure their guests also appreciated all the prizes they gave away including a cellular phone!!! :)

They also had such wonderful onsite AVPs from Francis Perez of Team Pat Dy & Notion in Motion. A scene from the same day edit of Notion in Motion even prompted the relatives of the groom to exclaim, "Parang artista nga!" You guys should definitely see both AVPs... :) I could not stop talking about them till the next day! Haha! :) 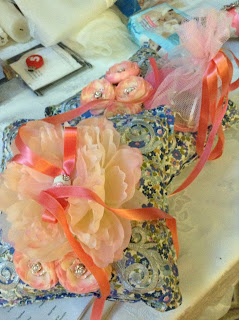 On May 19, the Feast of the Pentecost", we made our way to Gloria Maris, Greenhills. I was so looking forward to the grand entrance and first dance because the bride and groom planned on dancing from the entrance to the dance floor. This would be no mean feat because not all couples are able to pull this off... And I am so glad to say that they did make it happen amidst the cheers and applause of the guests. They did what they were not expected to do and the guests came out of the experience pleasantly surprised. I don't think there was anyone in the hall who did not have a smile on his/her face while the couple was dancing! Kudos to Gilbert and Precious! :)

The "Kiss My Shirt" couples' game was also fun for everyone with one couple garnering as much as 68 points! As Precious said prior to the game, "Be Competitive". And the bride and groom truly made it worth the while of the winner because they got buffet gift certificates from one of the leading hotels in the Metro. Wow! 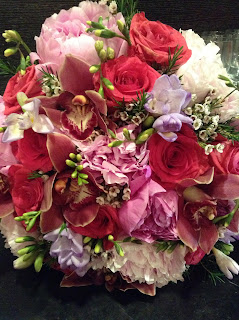 Vatel Manila and ETC provided the lovely bouquet and the floral pillows that matched the dancing shoes of the bride! :)

This programme had heartfelt yet entertaining speeches. Was really amazed at how all of them (4 males, 2 females) had the crowd reacting to their messages. 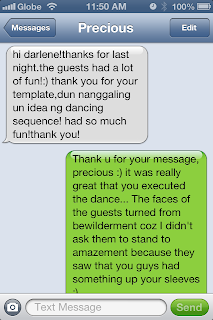 I guess they were able to write such crowd-drawing speeches because they truly care about the bride and groom, and they really knew how to describe them in ways only those who truly know them can. Kudos to the best men, their friend, and the maid and matron of honour for keeping everyone focused during the well wishers time of the programme.

Kudos, too, to Paul Vincent and Afama for their superb takes on what transpired throughout the day through their onsite AVPs. :)

Thank you to Precious and Gilbert for taking time to send me a message this morning. Truly, truly appreciated! :)

So now you all know why this entry has the title, "A Full Weekend and a Full Heart". :)