The 27th of April 2013 was a big day for me because I had two brides -- one who booked me for full coordination but changed dates and another who booked me during my first emceeing promo... :) Before you read on, do note that not all pictures came from me. I asked for permission from both brides if I could grab some pictures off their Facebook walls, just to complete this blog post. Both graciously agreed... such sweet brides! :)

Erlyn booked me for full coordination so many months ago, I can't even remember exactly when. What I do know is that we spent more than a year preparing for their big day. It was unfortunate that when she had to change wedding dates, we ended up getting one for which I had already been booked prior for emceeing. We thought it would be best to stick to an April date to avoid the rain; moreover, almost all suppliers were free so no loses in terms of downpayments. I asked fellow suppliers for recommendations so I could entrust Erlyn and Archie to a an on-the-day coordinator who could take care of her details. Erlyn agreed to have another team handle her on the day, but she requested that I still visit her during preps. 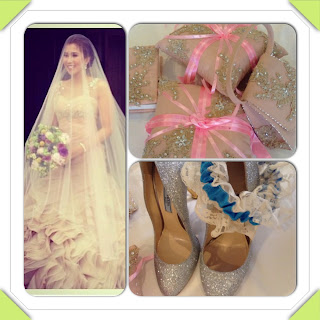 Fast forward to April 27, 2013 -- after hundreds of email exchanges -- I was in Dusit walking to Erlyn's room. Her blush pink gown was of course, breathtaking to say the least. It matched her skin tone, her slender figure, and her over-all bubbly personality. Accessories also came from premiere designer, Cecilio Abad.

The candles, personalized cord, and matches were ordered from Eyzel of PDW.

Make-up and hair were courtesy of Elaine Silva, Erl's sister, and her team. Even the entourage had their hair and make-up efficiently covered by Elaine's team. 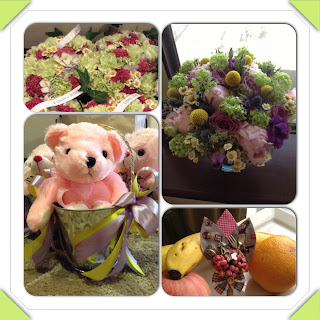 Bouquets were from Vatel Manila. I was transfixed for around 2 seconds when I realized that the bouquet had peonies and thistles -- both were part of my very first Vatel couple's bouquet and boutonniere. Talk about going full circle with Dylan! (Yup, this is my last coordination stint.)


When I mentioned to Archie that the rest have boutonnieres, too, he asked if he's the only one with a special handmade boutonniere from {ETC}. I said yes, of course! Archie responded by saying, "Syempre, di ba? Groom naman ako today". 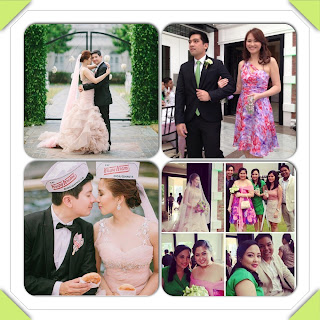 Archie, the fathers, the mothers, and the ladies in the entourage all trooped to Tito Boy Kastner's atelier so that they could look their best on this big day. Tito Boy made sure Erl's picnic theme would be communicated by the printed dresses. Look at how happy the colors are despite the rain that day! There's another print used for the other ladies but I haven't seen pictures yet on Erl's wall. I should have taken pictures of them in Dusit!


Archie looked dapper in his tux. And look! Erl got her wish to be photographed with Krispy Kreme hats and doughnuts. I know the gate picture and the Krispy Kreme pics came from Toto Villaruel's wall... :) So pretty! You won't think it rained just minutes prior. :)
After taking pictures of the details and discussing stuff with Thea, her OTDC, I transferred to Archie's room to check on him. I asked to see the boutonniere from {ETC} and of course, I took a picture. Sooooooo cute! I called for housekeeping to fix his bed, had a quick chat with his dad and his nephews, and reassured him that Hans of Uno Ritmo was ready to accompany him during his surprise song number later. Then, I went back to Erl's room. 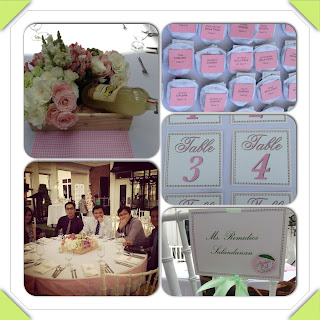 While there, I reminded Toto and the rest of the ImagineNation team as well as John Marvi and his Cinemaworks team that Erlyn had lots and lots of details waiting for them at the reception. Since Erl was already having her make-up, I decided to transfer to Enderun to check on her details.

What greeted me upon entering Enderun was of course, the heat. After all, it was prep time, so no airconditioning yet. I wanted to do a sample for the manong florist so I asked for the bottles, table numbers, and the box of flowers. Manong assured me he would add to the flowers since we only had one bottle per table. (And he did, based on the Facebook pictures I saw later on.)

I must commend the waiters of Enderun because they did all requests without complaining or muttering snide remarks. Yup, even if I made them repeat the arrangements of the white and black tiffany chairs; repeat the folding of table napkins because we had table napkin rings, even if they had to painstakingly fasten the table belts, and even if they were hauling boxes of bottles from storage to the pavilion and kitchen. There were lots of bottles because: 1) some were water bubbles for the ceremony area, 2) some were bottles for the centerpieces, and 3) some were bottles to be used as iced tea glasses for dinner. You can imagine the number of boxes they hauled! When they finished setting up the white chairs of the VIPs, the coords started fastening the place cards to the chairs. I did the designs of the place cards, stubs, and the table numbers and asked impress prints to handle the printing. Enderun does not have white tiffany chairs, so we had to order them from Maja Martinez - Angeles of Passion Cooks. :)

Before I left, I took a picture of the escort cards attached to the fans. Inside each fan pocket were three cards for Starbucks, Krispy Kreme, and for the raffle later. Krispy Kreme and Juicebox were already starting their set-ups, and the coordinators had a chance to test the DVD I made for Erl and Archie as well -- a slideshow of couple pictures, an OBB, and a growing-up AVP.

By the time we were already leaving the McKinley area, dark clouds were forming. I prayed hard. I asked God for just a little time -- just so they can have their garden ceremony. However, God had other plans that day, so it rained cats and dogs and the ceremony had to happen inside -- no choice. I'm sure the guests were still happy they got to take home the personalized umbrella giveaways. 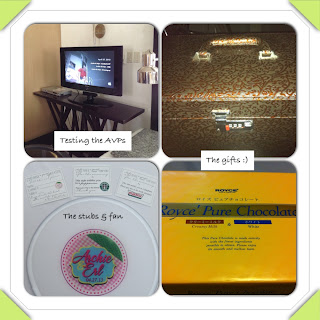 It was a bit disconcerting to see the raindrops on the windshield, as I was even joking with Elmer of Rejectkrew that I would take a picture of him before set-up and after so we can see how "fried" he would look after wiring his speakers under the intense heat of the sun. Of course, I'm glad they were able to quickly clear out their electronics when the rain started.

Loved it when Thea informed me that they were able to do group photos by the gate the florist set up and they got to use their E and A backdrop at the reception.

It was very heartwarming to see the pictures of the march, the first dance, and of course, to read the posts after the reception -- especially regarding the surprise song number of Archie for Erl. I am so looking forward to seeing the onsite photo slideshow of Toto and the SDE of Cinemaworks. Thank you, Thea, for taking time to call me that night just to let me know all went well; I know you must have been tired already by that time because you emceed as well. :)


Thank you, Erl and Archie, for the gifts! They are truly appreciated! :) 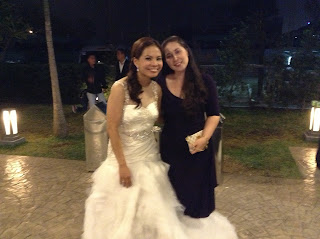 Marianne booked me during my first promo as emcee. Despite her busy schedule as a lawyer, she was able to accomplish the my emceeing file and send it to me with time to spare. After a series of exchanges, we were able to practically iron out almost everything in the programme. Soon it was time to meet with her, John, and Queen, their ever efficient head coordinator. I was excited to join the meeting because Queen became one of my idols after the "w@wies turned coordinators" dinner Ms. Benz organized. (I will write a separate post about her. :)

During the meeting, we thought of a way to spice up their grand entrance and make full use of their LED wall from Sensitivity, the sound and light support Jamsy would provide, and the live feed coming from the team of Bob Nicolas. It was great that both were game enough to consider doing a singing entrance. After all, 3rd Avenue would be there to provide vocal assistance should the song be overwhelming.

Prior to the day, I prepared possible backdrops to be displayed on their LED wall. I even bugged sensitivity because I was scared about the file pixelating and all. Good thing, all three came out all right. These are two of the pics that were shown on screen as backdrops. 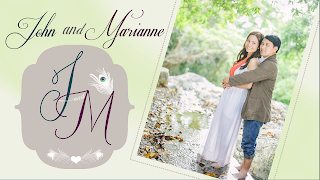 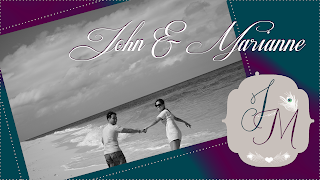 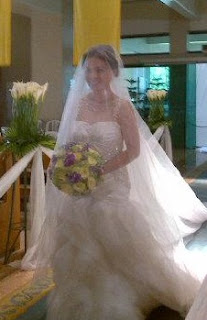 When John and Marianne arrived, we did a quick run through between bites -- yup, while Marianne was also being given a retouch by Tippy Dee and his team. They were even able to practice their dip as instructed by Tippy. Hehe! I got so transfixed by the practice, I forgot to take a picture of the beautiful Vatel bouquet, so yes, this is once again a screen grab from Marianne's FB wall. I had a chance though to take a picture of the cake that Kiko made and one of the set-ups of Gideon Hermosa. By the way, the gown is one of Marc Rancy's resplendent creations... :)

On the day, it was truly magical hearing 3rd Avenue do their blending right after I introduced John and Marianne. The moment John brought the microphone closer to his lips, the crowd started cheering. They finished their song on stage, danced to the chorus as 3rd Avenue performed their assigned part of the song, and finished with a flourish. But that was not their planned their first dance. They just wanted the crowd to think that way. They still had one more surprise up their sleeve -- a medley of 90's hits! That really brought the house down -- people were alternately singing, clapping, cheering, and taking videos as John and Marianne did their steps on stage. 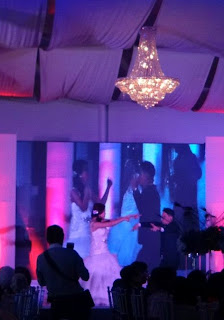 Needless to say, the grand entrance to first dance segment made everyone realize how much John and Marianne prepared for their big day. They also raffled off major prizes after dinner. Their raffle though was via trivia questions. Guests had to call a given number if they knew the answer. The first to call and answer correctly would definitely bag the prize. Though guests were busy going from the mobile bar, to the candy buffet, to the flip books area, and the buffet, they dutifully sat and intently watched both the rockshow onsite presentation of Francis Perez (Team Pat Dy) and the poignant SDE of Bob Nicolas. After the final speech of the couple, the guests didn't need to be invited twice to party the night away with John and Marianne as 3rd Avenue began their party set. :) 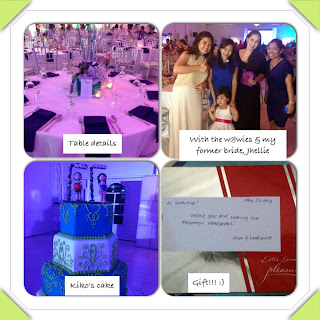 I had a chance to take pictures with the w@wies who were there, particularly Joed See, who won the digicam via the instagram contest, and Jhellie de Guzman - Santos, my former bride. I was able to chat a bit with Moki Gray who did such a wonderful job with the invites, the signature frame, and the monogram of Marianne and John.

Thank you again for the gift, Marianne and John. Will definitely use the items inside... :)