What's good for kids can be good for weddings, too!

I just want to commend Thoffy and team for coming up with an inviting registration area. It made the guests feel right away that they are in for a well thought-out wedding programme. :) 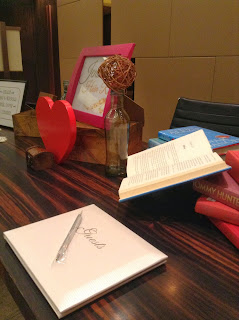 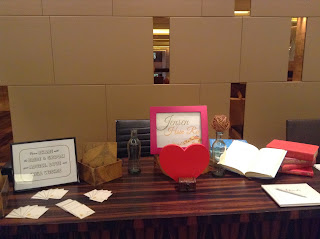 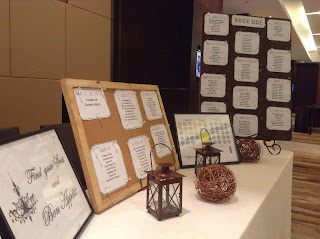 Noteworthy parts of the programme:

a) When we were ready to start, the entourage decided to spice up their march in by wearing props from Baicapture... :)

b) Jensen and Hsin Ru wanted to ensure the enjoyment of guests -- including the younger members of invited families -- so they thought of having a "name that kiddie movie" contest.

In order to pull this off, I had to enlist the assistance of my tech-savvy dad again. He downloaded the clips for me and converted them into a format I could use. Then, I took over, cut the clips such that I had only the parts that I really needed for the game (i.e. those without mention of the title in the dialogue).

True enough, the guests enjoyed guessing the movies... They actually thought they would all win, until we hit them with a movie that wasn't such a big hit. I also made sure the dialogue would not be obvious. (We had video for the first 5, and just audio for the next 5.)

We had one table winning the game, and of course, it was a young girl who provided the correct answer! Hurray for her! :)

c) We also had a fun couple's game. At first, they were all solid and no one was getting taken out. The question that caused some to lose: "Who holds the remote control?"

d) Of course, great onsite AVPs were shown that night from c/o Osep and Mimi as well as Alt-x.

e) At the end of the programme, the couple requested for a group shot. Really nice of them to think of having a remembrance of the people who worked with them to achieve their big day plans. :) 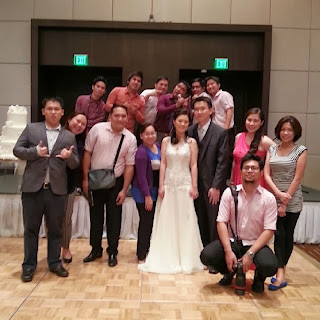 In case you would like to find out more about my emceeing packages and the current promo, do check out the following link: Raffle and Discount up to Nov 12, 2013 :)
Posted by Perfect 10 Weddings at 3:36 PM